Russians have made a dent in Hollywood, mostly for being the enemy. Every now and then, when the Hollywood brains are in need of a good villain, they ring up their Russian colleagues.

The World Is Not Enough

Directed by Michael Apted
Released in USA on November 19, 1999

“Can’t you say a hello, like a normal person?”
— Zhukovsky.

Robbie Coltrane as Valentin Zhukovsky and two other babes

Bond. James Bond. Vodka. Irina Vodka. I’ve been trying to say that smugly in front of the mirror for half an hour already, but you need to have Daniel Craig’s sky-blue eyes or Pierce Brosnan’s hairy chest to do the Bond thing properly. The latter had particularly intimate relationships with Russian bad guys during his double-O-career.

Have you heard Brosnan speak Russian? Mr. Bond, pretending he was a Russian doctor, smiling with his Colgate smile, pronounced proudly “Ya uchilsee v Oksforde” (“I studee-ed in Oxford”). If a single Russian had heard that accent, Bond would have failed his mission.

Bond is a good guy, though. Let’s look at the vicious party. Robbie Coltrane (remember Hagrid from Harry Potter?) played a Russian bandit Valentin Zhukovsky. To say the least, the character is a bit overstereotyped (starting with his exaggerated belly). Zhukovsky had earned a couple of billions selling black caviar and—pure irony of fate—nearly sank in a caviar barrel in one of the scenes.

Zhukovsky reminds me of Russian fat cats (also called “the new Russians”) in raspberry-red blazers who came into owning a lot of money shortly after the fall of the USSR. These guys have long turned into old vintage jokes, by the way.

At least we learn that in his previous life Hagrid was pretty generous, wore disgusting tuxedos, had a heavy golden chain and ran a shady oil business. Like most of the Russian bad-ass guys of the nineties did.

Directed by Lee Tamahori
Released in Russia on December 12, 2002 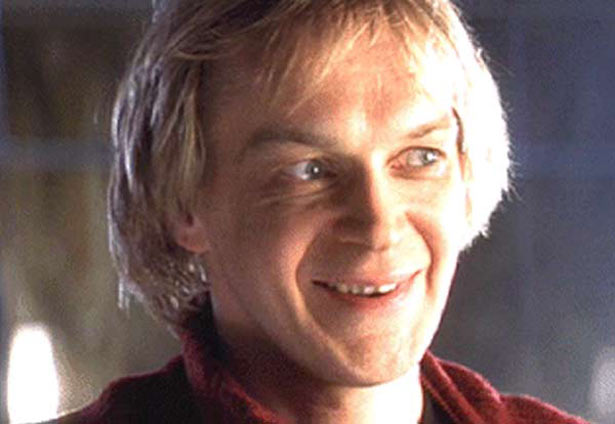 Mikhail Gorevoy as Vlad in Die Another Day. Is you Madonna?

However, in 3 years Bond’s directors made an attempt to wash away the guilt for painting us thick black. So they showed a Russian guy playing a Russian assistant-to-the-bad guy. That must make him a deputy bad guy.

Vlad’s (Mikhail Gorevoy) total screen time was not more than 5 minutes. There he is—holding a computer after his boss, displaying new high-tech gadgets, and there he is—falling out of the plane. Why did he have to be Russian anyway? No stereotypes, no typical national traits. Just a goonish haircut. What a disgrace! If you are using a Russian person, it would’ve been fine to give him some proper airtime.

Directed by Michael Bay
Released in USA on July 1, 1998

Watching this movie is a must for all Russia-lovers, just like pretending you’re amazed by Dostoevsky or have read Leo Tolstoy’s unabridged version of “War and Peace” (which is 1173 pages long). Apart from shedding tears over Bruce Willis (or Liv Tyler), there is another reason for watching: the coolest Russian astronaut ever: Lev Andropov.

How did they even conceive such a character? The director might have met Russia’s most prominent alcoholics and homeless, or heard about them during the Cold War, because Andropov’s behavior really rings one particular bell: this is what Russians think the world thinks about them. It’s weird, nevertheless it’s fun: brave Lev does his work thoroughly, saves the Earth and shows that the Russians can be good friends with Bruce Willis and Ben Affleck.

Andropov is not a bad guy at all. But if it hadn’t been for his 1.5 year presence on the MIR space station, I’d have thought he was a schizophrenic. Because he is a bit over the line even by the Russia’s most extreme measures.

Lev walks around the space station in an ear-flapped hat and a T-shirt with a soviet star. The space station is filled with sounds of Russian couplets. Strange that he didn’t try to sell Willis a couple of matryoshkas.

The climax of Andropov’s russianness was in the episode when the astronauts’ team was about to fly away from the asteroid, but the engine wouldn’t start. Lev rushed to the engine with a spanner and started beating the front panel like mad. Which actually seems about right around here: Russians still tend fix their TV sets the same way.

God, I adore this movie. All its characters, without the slightest exception, are idiots. But that’s a special kind of idiot that makes you laugh throughout the whole piece.

Not surprisingly, Russians are total idiots here as well.

A gangster Konstantin Konali (a transcription meaning “badmash”) was planning to conquer the world with the help of a computer game. Moreover, he carefully kept up the bandits’ traditions like shouting “The world’s going to be mine” in the centre of the Red Square, dining in glitzy restaurants and wearing a stupid goatee.

The brave police academy team, however, wouldn’t let the world get into trouble! They hung around the most well-known Moscow places, drank vodka and said “Nazdorovie” (“Cheers!”) and even gave a ballet performance in the Bolshoy theatre.

Movie will guide you through Moscow of 1994. And will help to explore some mental illnesses like incurable idiocy. As for the villain part, we all know that it’s Windows that conquers the world, not Tetris.

Directed by Sylvester Stallone
Released in USA on November 27, 1985 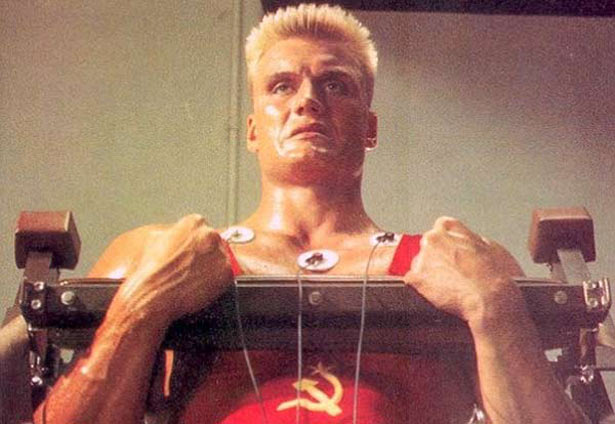 The image of Dolph Lundgren in red boxer shorts still burdens the minds of impressionable Russians. His captain Drago, a huge mountain of muscles with a hilarious squared haircut, came to the USA to defeat good old Rocky Balboa and presumably to get a new pair of boxers.

If all Russians were like Cpt. Ivan Drago, we would’ve been extinct by the year 2012 (just like the Mayans predicted). Even for 1985, that was too offensive to portray our Russian comrade as a brainless killing-machine. A man of few words, Drago looks like Robocop’s step-brother. To make the picture complete, he has a wife Ludmila—a cruel chick and a bright illustration to “there was no sex in the USSR” notion. In this case, thank God.

Directed by Roland Emmerich
Released in Russia on November 12, 2009 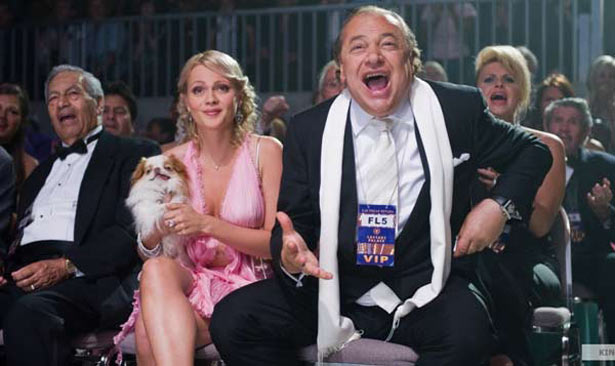 Zlatko Buric as Yuri Karpov in 2012

Roland Emmerich has made one more attempt to sneer at mother Earth. The sun shoots neutrino at the planet, everything melts like ice cream in a microwave oven, John Cusack only lacks a Superman suit.

And suddenly—a ray of light in the havoc! A Russian bad guy: Mr. Yuri Karpov, a former boxer from Magnitogorsk (that’s right at the border between European and Asian parts of Russia), present oligarch with billions of Euros and two impudent sons.

Mr. Karpov carries the idea that you can’t buy life, liberty and the pursuit of happiness for money. This fellow bought places on a special ark for himself and for his sons to escape from a great tsunami. The moral of the whole thing with the Russian guy revealed when he sank saving his sons.

Directed by Guy Ritchie
Released in USA on October 31, 2008

—I thought you lot drank vodka?
—Whiskey is the new vodka!
—Are you not joining me?
—Oh, I don’t drink. 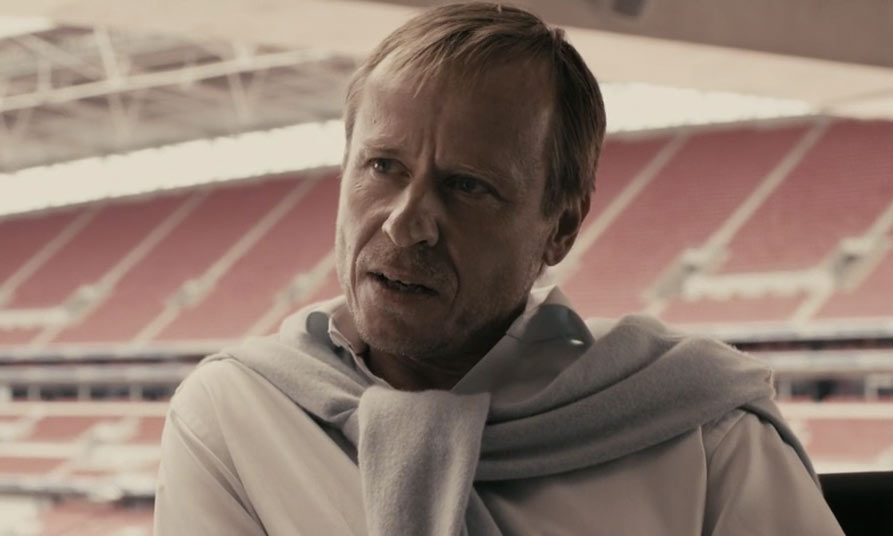 This isn’t your typical Russians-are-lamoes kind of Hollywood movie. This is Guy Ritchie’s film and, well, by 2008 he has seen a lot of real oligarch Russians in London. So, his depiction of Russians is somewhat hyperbolized reality.

Yuri Omovich (which is a clear reference to the very well-known Roman Abramovich) is a wealthy Russian property dealer who is steadily becoming the new power of London. I wanted to say he was ‘the main villain of the film’ but suddenly realized there were absolutely no good guys whatsoever. He loves art, beautiful women—and loves spending a fortune on them. He speaks with a noticeable Russian accent, but the command of language is surprisingly good. Oh, and he doesn’t drink.

As it is a Guy Ritchie movie, he obviously has some butcher hitmen that do all the dirty work for him.

They seem absolutely ridiculous but totally go with the widespread imagery of Russian military tough guys. To bring every notion about Russians back and destroy the macho act, Guy Ritchie shows the same lads in a very controversial boudoir scene, the events of which are happening with a fabulous soundtrack by Russian punk-rock band called Sektor Gaza. But don’t wanna give you any more details—see the movie for yourselves.

And yet—the command of Russian language seems to be a bit questionable. Especially the correlation between subtitles and actual Russian words. Like this one: 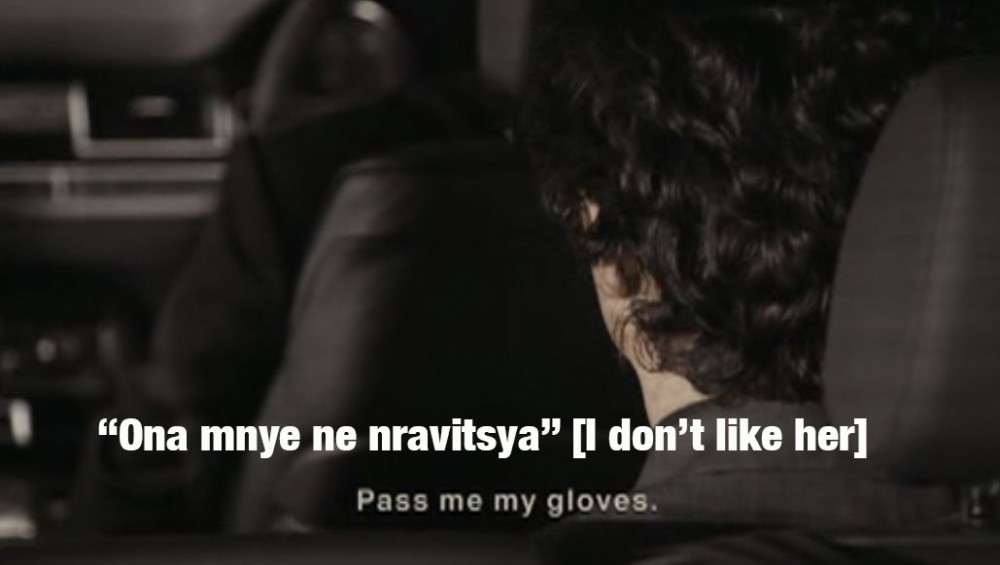 Guy Ritchie seems to have found a new way to depict Russian villains. We’ll keep you posted on more baddies to come. And they are sure to come.