Russian animation finds itself in a state of a deep lethargic sleep. Today’s attempts to make anything worthy are as alive as the growing nails of Lenin. Although, he is regularly shaved and manicured, witnesses say.

Dozens of creatively challenged computer-animated films and series appear as fast as undesired hair. And they disappear without a trace. This section suggests: maybe one should rather put aside their whatever bitten fruit on the logo they have and go try drawing Р° good old pencil picture again? Like Disney did. And those guys in the USSR also did—almost a lifetime ago.

Going over the golden days of Soviet animated films, such as “Winnie the Pooh”, “Nu, pogodi” (“Hey, Just You Wait!”), “The Comeback of the Prodigal Parrot”, “A Mother for the Baby Mammoth”, Bears & Vodka cannot help telling you about one of the greatest masterpieces in the history of Soviet animation, “Hedgehog in the Fog”, directed by Yury Norstein, written by Sergey Kozlov at Soyuzmultfilm studio, 1975.

Though not very much loved by children, the film has been worshipped by 140 critics from all over the world, winning the first prize at “All-time animation best 150 in Japan and Worldwide” (Tokyo, 2003).

Some people would say “good—the film deserves it”, some would grin in surprise. The plot is nowhere near Tarantino and there aren’t many lines in it either—that is why even if you don’t know Russian it is advisable to watch the cartoon. You would have the same impression as the native speaker of the language of Pushkin, seeing it for the first time. For the record, the piece is not always well understood even by adult viewers in Russia.

The film works on many levels, and everyone is to see it from their own perspective. Some compare it to Tarkovsky’s “Stalker” for its observational and withdrawn nature, others see it as an manifestation of the oriental part of the Russian soul. There is a line that is widely cited, among the others, where the Hedgehog says in his melancholic and thoughtful manner: “I am the hedgehog. I have fallen into the river.”

I know a lot of people who accurately tried to gripe the deep sense implied by the director and the scriptwriter. Even in the age of reason, they failed. No doubt there is a lot concealed within the imagery, because after careful examination of the 10 minutes film, you feel like the weight on your shoulders, and you can’t even get what exactly they mean. Too sad, the only man who had probably known, the script writer and the author of the book under the same name, as well as the inventor of other 8 stories about the hedgehog—Sergey Kozlov, passed away on January 9, 2010.

However, there is still a light at the end of the tunnel. The hedgehog finally finds the bear cub, and together they heat up a samovar on the juniper twigs fire, and they speak to each other. “So good we are together again” thinks the hedgehog. And they continue counting stars. For if it weren’t for them, who else would have done it?

The “Hedgehog” was created in 1975, with the use of the earliest ever cartoon-making technique—cutout animation, which makes films look like 3D images.

Cutout animation is a technique for producing animations using flat characters, props and backgrounds cut out from materials such as paper, card, stiff fabric or even photographs.

Even in his last works, Jury Norstein assiduously implied the same method, refusing outright to use computer graphics.

See how it works: the screenshot from the Twilight River and the Great Tree sequences:

The fog was made by putting a very thin piece of paper on top of the scene and slowly lifting it up toward the camera frame-by-frame until everything behind it became blurry and white.

Hayao Miyazaki, a prominent Japanese animation film maker and the author of “Spirited Away”, admits “Hedgehog in the fog” to be one of his most precious favorites. “Norstein has exerted a tremendous influence on Japanese anime films artists, including such outstanding figures as Hayao Miyadzaki. The top Japanese film directors have learned much from the Norstein school,” Р° representative of the Japanese Ministry for Foreign Affairs was quoted as saying.

In 2004, Jury Norstein was announced the holder of the Japanese Order of the Rising Sun.

In January 2009, a statue of the Hedgehog in Kiev was inaugurated. In the statue, Hedgehog sits on a tall stub and holds his fardel. The wooden figure of the famous cartoon character is covered with screw quills. “The hedgehog is there to cheer up the folks of Kiev when they are in a bad mood,” say “Kiev Landscape Initiative” organization, which erected the monument. 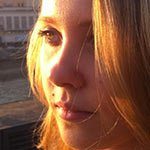 Ksenia Sputnik is currently orbiting some of the biggest publishing houses of Russia, which makes our small editorial immensely proud.