The KGB Still Wants to Watch You

Russians love a good conspiracy theory. We have a genetic predisposition to seeing covert schemes everywhere. Some people might call this “paranoia”. I always thought of it as a charming — if somewhat neurotic — part of the national character.

Yet my fondness of this national quirk took a bit of a beating last Friday, when the Russian Duma — a veritable fountain of legislative treats — gave the first (of three) go-aheads for a new law which widens the definition of — drumroll — “state treason”.

By all means, the quest for protecting Russian security has my most profound support. But the devil’s in the details here. Please forgive the mindnumbing legal mambo-jambo, but some direct quotes from the bill seem in order to illustrate my point.

This bill wants to put a big ol’ equals sign between state treason and:

Giving up information that amounts to a state secret to a foreign state, an international or foreign organization or its representatives; or

Providing financial, material or consultative support to a foreign state, an international or foreign organization or its representatives for activities targeted against Russian security, including its constitutional order, sovereignty, territorial or state integrity.

I hope this is just my legislative ignorance speaking, but given that the application of sensible Russian laws sometimes defies all logic, I fear that in the not too distant future, telling our esteemed B&V readers about, say Border Patrol Daytraditions, could be fraught with the risk of ending up in jail for four years.

For the time being, sagely rights activists have said this bill is more evidence of the return of Iron Curtain 2.0, while credible newspapers, generally not prone to hysteria, have been drawing parallels to Stalin-era legislation. For the sake of fairness, I should point out that other gurus have said this law resurfaced because of Russian gas giant Gazprom’s troubles in the EU and that this is a way to protect the state darling against mean EU folks with their anti-monopoly pokers.

Maybe that’s why this four-year-old bill (yep, it was drafted back in 2008) has resurfaced now. Who knows? I don’t. And if I did, I wouldn’t tell you. You don’t look very trustworthy. And far too foreign. Or international. 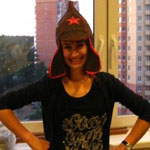 Marina Taiga is said to own Moscow’s only petting zoo of koalas, kangaroos and kookaburras, which she keeps on the balcony of her studio apartment. Her neighbours aren’t pleased, but she distracts them with delicious vegetarian borsch.