One Night in the Emergency Room

Reprinted from B. F.’s journal, with author permision. Edited by Max Bears. Photo by Tim Mansimov.

Like any big city, Moscow lives in several social dimensions. They normally develop with very little interference, but sometimes circumstances open doors between them, just to remind you of the world you live in. And this is just a tiny fraction of what is hiding in this social lab. Losing control for a split second can get you behind the scenes just like that.

Some days ago, as I was getting home from work, quite drunk, or, as I like to call it, in deep spiritual conditions. It seems that I crossed the way of some Southern Russian guys in search for musical inspiration—say, a cellphone, some money, anything a drunk brother can offer in this crisis. At least I think it’s what must have happened, since the only memories I have between the moment I left work all shining and smiling and the moment I wake up tied down to a hospital bed are the big bruises on my leg and some painful spots on my head. They only tell me that the police found me barely conscious at the metro station, and they sent me to the Moscow First Aid Science and Research Institute.

I wake up in a hospital and go back to sleep.

When I wake up for the second time, it is night. I am still in hospital bed, now untied, in socks, underpants and a t-shirt. I realize something bad had happened. But what, I would never know.

The nurse on duty comes by. She says she isn’t letting me go home. “You think you are at a party?” The party ended some hours ago, no doubt.

I sleep for as long as I can, but in the early morning it is already unbearable. NON COMPRENDE. Why am I still here, where are my things, what happened?.. I’ve got a catheter in my left arm, which I begin to scrach out. A pathetic way to show I din’t give in, protesting against the system.

My bed is in the corridor, which would be quite comparable to a normal hospital, if not for the absence of the specific sterile disinfectant smell, and the filthy walls, floor and barred windows.

At 8, I am cattled to a room at the end of the corridor. Three guys are sleeping there. Three drunkards. Тot all three are there for the same reasons, though.

One seems a full-time pissed idiot. Also on the spirit duty. The second one has been here for a month. Reason unknown, something to do with the stomach. The third says nothing, but seems as wasted as the other two. People, all men, wake up and gather at the second most popular place on the drunkards’ 4th floor after the smoking corner (which officially coincides with dirty stinking toilets, almost as inviting as the road facilities), the couches at the end of the corridor…

All faces look miserable, as if touched by some particularly nasty incurable disease. I understand this is no freak-show, but I can’t remember such a collection in a hospital.

At this point I remember a low-level retirement house in Europe, where dusty old things in pajamas wait for the death, in dirt, piss, shit, sadness, loneliness and grief.

A day nurse comes to take some blood, and I generously offer her my right arm. Some time afterwards, a doc says I will be released tomorrow. I don’t know if she is joking, but I begin to understand that going out of this Institute isn’t going to be that easy. I have no phone, no documents, no clothes. Nobody knows I am here. I have no access to the Internet or the public phone…

Here I must confess that my burning sense of drama, truculent imagination and poor mood are not being of any help, so I begin to wonder whether I could stay here for years, or only for months… It now seems like a goof way to disappear, if needed—just get drunk, get into this place and you’re as good as gone… Maybe I AM in jail, in fact… Or could I have fallen on organ dealers ? Fortunately not, First Aid Institute doesn’t seem to have taken from me more than time and blood—of poor quality, no doubt!

It is already 11 am, I politely ignore breakfast in the “lunch room” (better starve than eat like a dog there…) and after much wandering long the corridor and difficult deliberations with a second doc (all male docs cheerful Caucasians, all female docs fat dwarfs in an aggressive defense mood.

There is, though, one pretty piece of girl illuminating everybody’s hearts on the strictly male 4th floor. There is always one, I figure.

I am allowed to leave the building under the supervision of a distant colleague, a young chemist that intoxicated himself during an obscure experiment he doesn’t really speak about. Nobody knows I am here at the hospital and thus some days can pass before a friend or an official comes over to take me away. I still have no documents and no clothes.

I have a brief converstaion with a guy who burned his throat with acid in an attempt to get through after-drinking loomy morning stomach and headache, in one word—opokhmelitsa. His wife had served him a good dose of acid in the glass of water he had prepared himself. Distraction does wonders.

Next step—getting our documents. All men leaving the Institute this day line up in front of the barred door that lead to the elevators with a piece of paper in their hands, thus attesting their identity.

We’re all more or less dressed alike: slippers, pajamas pants (I was told that mine, torn, had belonged to a “Painter”), and t-shirts. We go down to another building, still more or less in queue, under the surveillance of the Cleaner, a 50 year old woman bathed in the piercing administrative mood. You know how this cancer transforms hospitals in prisons and people in dirty pity tired power loving egocentric pest, I’m sure. Though as a friend of mine says, you don’t land in the administration by chance, and indeed it must take a call no weaker than the Christ’s to enjoy such position!

The Cleaner is clearly fed up to listen to complaints all day, hers not included, but still wouldn’t mind jokes or compliments. Under her strict orders, we defile before the amused nurses and visitors of the main building.

It’s Christmas, everyone! File up to receive your presents in the tiny dirty corridor!

If you have been a good boy, then you should find something was left behind you when you were admitted, if not, well, serves you right… We go back to our 4th floor. I am happy to see that those who took my MP3 player, my bag and money had the courtesy to leave behind some cash, my keys, all my cards and all my documents. I have a feeling I was robbed more than once that night, but still not completely… It could have been worse…

We wait for another hour before we get our clothes, it is already 1 pm. We get dressed, and I am finally allowed to leave, strictly under the condition that the Chemist would supervise my coming back to work in safety. No surprise, once in the street, I leave him to his matters (astonished that I didn’t plan to follow him quietly and expressing his determination to fulfill his duty as promised to the doc, no kidding!) and I rush home to make contact with reality.

All is well that ends well. The rudeness apart, it was some help that I received. The city did fulfill its rescue and educational duties, as a matter of fact. It was all in the Russian way, of course, but it was for free. Mind the gap, society has many faces. 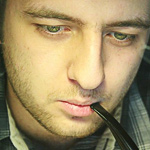